Today’s topic will be the Urban Design of Los Angeles. The main tools will be top-down infrastructure (Ecology/landscape), fragmented sub-urban (suburbia) and places for experimentation (micro/temporary programs).

Los Angeles is a car city. It is the antagonist to New York, the incarnation of the battle between the East and West Coast. Hollywood is located in Los Angeles and Hollywood produces the modern understanding of America.

Los Angeles is also a (horizontal) grid city. The city grew out of property speculation with Asian migrants building the railways in hope of a better future. Architects came to Los Angeles to build a small bungalow or two. Los Angeles is multiple cities in one place (not geographically, but imaginary).

Los Angeles is also a Postmodern City. The modern idea ended with the Second World Ware. Postmodernity interweaves the past with the present and expectations of the future in contrast to Modern concepts of Communism, Scientific endeavour and Socialism.

Ed Soja describes Los Angeles as highly fragmented and inducing a feeling of being lost and being dislocated epitomised in the Bonaventura. Conventional understandings of a city are questioned by Los Angeles. Conventional standards of planning do not apply. Individuals, pressure groups and planning authorities vie for the decision how to develop the city. The non-planning has become a characteristic of the city. Frank Gehry is a product of Los Angeles. Los Angelites spend 1 month per year in their car.

Los Angeles is also plagued by skid rows (homeless housing in tents) and riots, both forming the character of the city. The Mexican past of the city mixes with the American identity and incoming Asian cultures (Korean, Chinese and Japanese).

Los Angeles laid down the grid and people were invited to come to Los Angeles. Real estate taxes drove the engine of Los Angeles. 160 administrative subdivision are contained within the 5 counties Greater Los Angeles covers.

Los Angeles was unexplored and presented itself as a desirable opportunity. Route 66 was the road from Chicago to Los Angeles that people travelled in pursue of happiness. Los Angeles was sold as an antidote to  the urban city by promoting the suburban. Trams connected the suburbs to the centre, but soon where complimented and overtaken by highways. Within 10 years in the 1920s Los Angeles grew with the incoming migrants from empty fields to full-blown city. As a side-note, this is happening in most major cities in developing countries from China over India to Nigeria. Los Angeles also planned quarters that enforced the segregation.

Los Angeles had no notable economy before 1920, but soon produced 25% of US oil and soon expanded its importance via the film industry.

The floodwater infrastructure cuts through the city and carries valuable water to the ocean. The hostile environment (swamp, desert, mountains) made occupying the area a difficult task. Vast and strategic infrastructure is necessary to work. Water is imported through massive aqueducts from Colorado. Electricity is imported with the longest high-voltage electricity line from the Pacific Northwest. The hot summer makes people use air condition on an incredible scale. The interstate highway connection to New York binds it to the rest of the US. The former Los Angeles River has been converted from meandering to a straight line. Most of the time it is an empty 8 meter gap in the city, but during strong down pours it may completely fill up with floodwater. Graffiti artists reclaim the floodwater systems by filling them with art. People reclaim the floodwater system with sports and recreation. (Reclaiming) Infrastructure will become a core task of architecture.

Suburbia was an attempt to decentralise cities in the face of nuclear threats in the cold war. Los Angeles has no strong centralised core, but equally spans into all directions. The fragmentation ensues as all suburban areas create their own nucleus.

Pacific Electric Railway connected the disparate suburbia and enabled movement, followed by the highway.  Industry gathered along the river and fragmented the city even more: industrial suburbs.

Hollywood is a suburb. The suburb was projected to the rest of the US with the help of the film industry. The suburb was also a dream where each hard-working American can have a house.

The suburban and exurban has become urban as the density of suburbia and the communication technologies removes any distance. Modern cities are hybrid, both urban and non-urban.

New architecture was tested in Los Angeles. Many architects went to Los Angeles to build bungalows and tested new approaches how to built. Los Angeles is the playground of architecture. The Lovell beach house was built in the 1930s and looks like contemporary 2010s architecture. 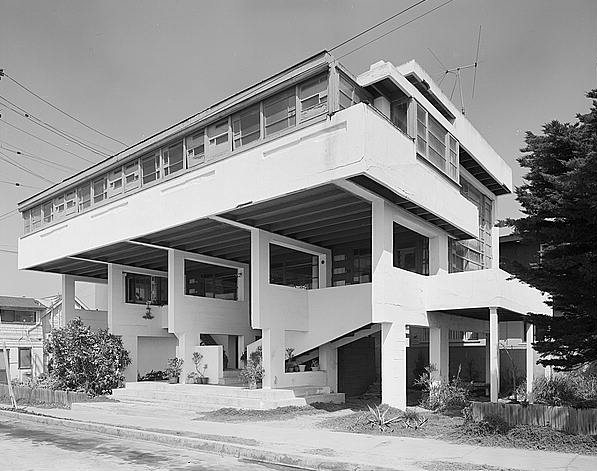 Architecture of single buildings is the first step towards Urban Design. Houses are the atomic elements of Urbanism. Frank Lloyd Wright becomes the greatest American architect and inspires many architects in Los Angeles giving the Urban Characteristic to the city. Architects pick up elements of the past, mix them with their interpretation and creating buildings for the future in the present. Los Angeles was the core of Postmodern Architecture in the US. Experimental Architecture becomes a core concept to create new architecture put forward by Gehry such as the Disney Concert Hall.

This site uses Akismet to reduce spam. Learn how your comment data is processed.